I’m using atom on Arch Linux. When installing platformio-ide via the package installer integrated into atom the entire atom editor freezes after a couple of seconds. After a short while a dialog pops up suggesting to force close the not responsive editor or wait.
The only way to get atom running again is to manually remove the platformio-ide directory in ~/.atom/packages .
Unfortunately I’m too new in this business to find atom log files.
Running atom with --log-file some-name does not even create a log file.
Running atom -f doesn’t create any output either.

Anyone out there who could give me some advice?
Thanks in advance!

Looking into electron’s console log revealed that there were package dependencies missing which (apparently) were not installed automatically.

and then installed all the missing dependencies in one step:

then I installed platformio-ide again

After relaunching atom it automatically began to install “platformio core” and complained abount “platformio-ide-terminal” to require rebuild which I did. It also asked me to restart Atom.

After the second relaunch Atom continues to show the well known pop-up, here with the message: “PlatformIO IDE has been successfully installed! Please restart Atom to apply the changes.”

This exact message continues to appear independently on how often Atom is restarted.

When I have time again I will post if platformio-ide is actually working.

I am currently getting the same error on install, but on the Windows 10 platform. I have removed Atom and reinstalled, and each time it appears to function fine until I install PlatformIO, at which point I also recieve the “Program Unresponsive” dialogue.

On an freshly installed Ubuntu you can neither install platformio-ide via cli nor from within Atom. Atom will always freeze.

With the workaround of installing dependant packages and platfromio-ide with apm from the command line directly, I got Atom to run on my Arch Linux machine, yet Atom does not show the PlatformIO home screen. There are no error messages. Neither Atom pop-ups nor in the developer tools console (CTRL-SHIFT-I).

In the package dependencies above “busy-signal” is missing:

I had to do the installation process twice, since atom was very quick in auto updating paltformio-ide to 2.7.1

I think that somewhere you can disable auto-update by editing a certain file. But which one?

If anyone knows, it would be cool to know how!

@akrusen It’s in the package settings for PlatformIO 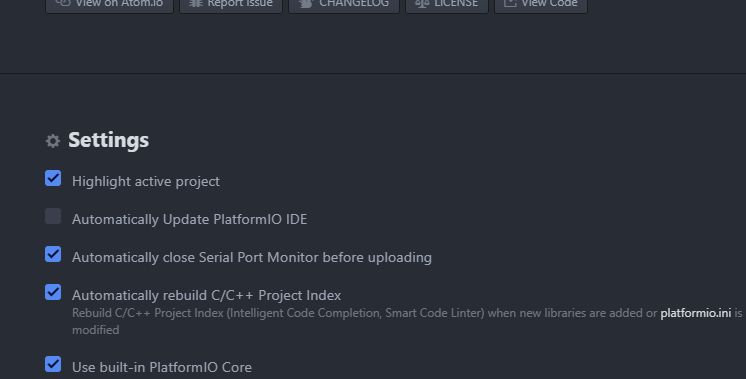 and it seems to be saved to Atom’s config.cson, which is accessible through the ‘File’ menu in the UI.

It’s location on the filesystem is probably different depending on the OS though, on my Windows box it’s in %userprofile%\.atom\. On Linux it’s probably under $HOME/.atom. Have no idea about Mac though.

Have no idea about Mac though.

Found it on the Mac: it’s in ~/.atom/config.cson