CLION "Nothing to run on"

I have a project with platformio + clion working great on my laptop. I moved the project over to another computer (via VCS - really I just checked it out at a second location) and I am back to a familiar place: “Nothing to run on”

I think I did everything in the guide. I created a profile in “Build Execution & Deployment” / “Cmake”, re-initialized the pio project, everything I could find in that guide.

Neither the working nor non-working ones have a “Custom Build Target” defined.

I think “Nothing to run on” is really telling me it’s missing a “target” but I’m not sure where to set that.

What am I missing?

I don’t have a [platformio] section where I define a default. I tried that, and it didn’t seem to make a difference - and on my other instance of clion I don’t have that and it works anyway. I’m not entirely sure what’s up with that.

I did make a tiny bit of progress, though. I created a ‘Production’ run configuration, which is a cmake target. That actually did what it was supposed to, and it recognizes that there are two possible targets - feather32u4 and adafruit_feather_m0.

Can you show a screenshow of how the Preferences -> Build, Execution, Deployment -> CMake configuration looks like? Especially looking at https://docs.platformio.org/en/latest/integration/ide/clion.html#clion-does-not-load-project-build-environments-from-platformio-ini, it says that sometimes manual creation of these profiles is needed. I only see a configuration “Production” in your screenshot if I interpret it correctly.

I can. But read below, I think I figured something out. 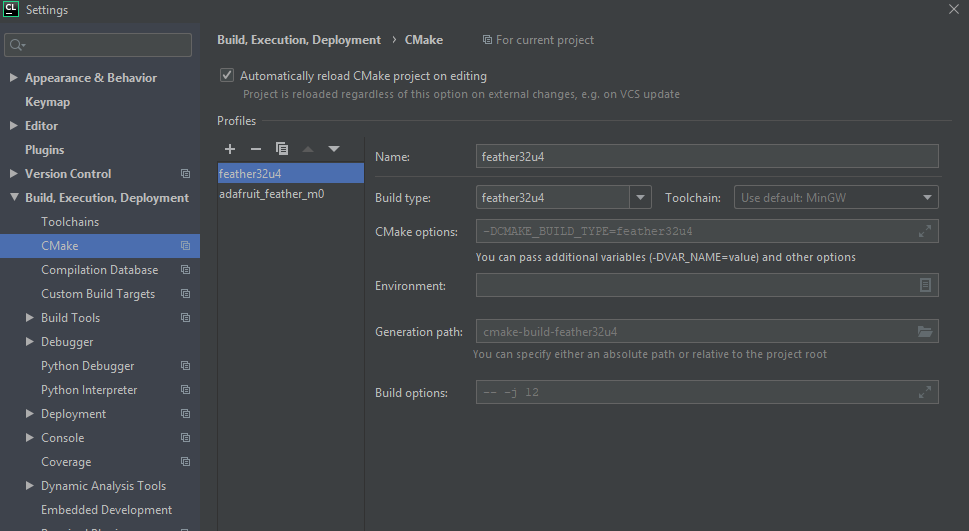 I think I figured out two things are required here:

For a while I had a target named “Production” but I looked at the CMakeLists.txt that got generated by pio init and it includes this at the end:

I had come across that dummy target once before but I didn’t dive into figuring out what it was / why you needed it. When you generate a brand new project with clion file / new project / platformio, it seems to generate Z_DUMMY_TARGET but if you fool around adding/deleting/moving stuff and you lose that target then everything works fine until you try to generate PlatformIO Upload.

I don’t understand PlatformIO enough to know what’s going on here, but since this is the internet let me recklessly speculate: when you add that PlatformIO Upload run configuration, it seems to look for the available targets specifically named Z_DUMMY_TARGET … why I couldn’t tell you.

What I’m trying to figure out is whether this is a platformio problem, a clion problem, or is it neither and it’s just my confusion?