I am currently working on elementary OS 5.1.2 Hera x86_64.
I am having issues installing the boost cpp library on platform IO, it shows up these errors.

It even shows the libs are included in the lib manager… 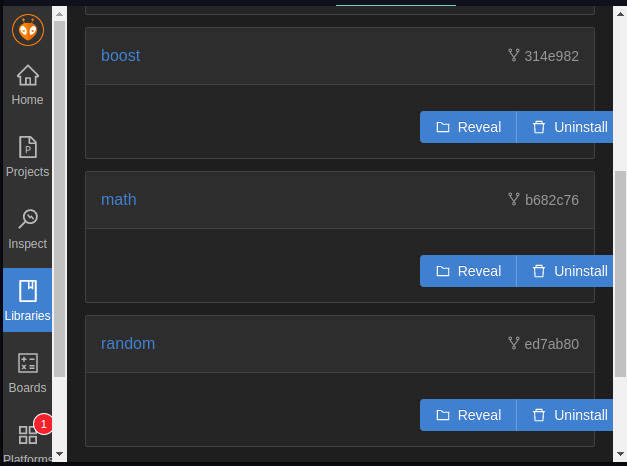 and these are my code header files

With the same header files, my code compiles well on the g++ compiler. ie

I have referred to the following links still no help …

Hello out there, I experience issues with LDF when using Boost Libraries (see https://github.com/boostorg/preprocessor) The content of the referenced repository is placed in <ProjectFolder>/imports/boost/preprocessor In platformio.ini, lib_extra_dirs is set to imports and to imports/boost (I have tried both together and each of them separately). The problem is that the library does not get found by the LDF and does not appear in the library dependency tree. When I add imports/boost/preproces…

fatal error C1083: Cannot open include file: 'boost/config.hpp': No such file or directory

how to fix "fatal error: boost/beast/core/detail/config.hpp: No such file or directory"

Hi there, I have boost c++ libraries in /usr/local/boost_1_66_0/stage/include/boost/ I am trying to compile a c++ example and i'm getting fatal errors. how to...