How to set up ESP32 SDK/ toolchain

I’m confused as to how to get platformIO to install, or locate the SDK + toolchain.

Trying the search I get:
Nothing has been found by your request

esp_bt.h is nowhere on my filing system, so I tried downloading the SDK+toolchain myself, and adding to platformio.ini

(it seems to require the full path?)

…this seemed to locate the header, and I got a new error:

my question is, what’t the correct way to connect the IDE with the SDK+ toolchain? Do I have to locate and include every header and library manually?

You are trying to compile the most recent version of app_bt.c against PIO’s esp-idf version, which is from at most Nov 27, 2017 where some functions simply don’t exist and header files were renamed.

You are getting that “undefined refrence” error because even though you have include the function’s definition via the header file, the function code itself is not compiled and linked it. You need to make PIO compile the esp_bt.c file.

Also it seems that you’re including the header file from a seperate esp-idf directory, not PIO’s folder. PIO’s version of esp-idf (in your home folder at .platformio/packages/framework-espidf) does contain the bt component folder, but it has a header file called “bt.h”. However, PIO’s version of esp-idf is a little bit older. If you look at the current version of the “bt.h” on Espressif’s github repository, you’ll see

PIO’s esp-idf version simply doesn’t have that function because it’s not recent enough. You can successfully compile an older version of the app_bt.c example from this commit. I have personally verified this.

There’s a few things you can do:

This is Michael whom you helped before. I am trying to run ibeacon_demo.c.

My platform IO is using Framework IDF 3.4. But, the compiler could not find esp_bt.h file.

Today the PIO package has that header file.

Why is the error occurs? Thank you.

THe component is only enabled once you activate bluetooth support though.

So just like the original project does with its

You’ll have to configure ESP-IDF according to the docs to enable bluetooth (and WiFi coexistence if needed).

I alsoe needed to make the project ESP-IDF v4.0.1 compatible by:

then it compiles for me.

Thank you for your quick reply!!! I see how the version number works. Thank you so much for a lot of information and suggestions especially for BLE (not so simple to set up right).

I am going to read the document and work on it. Yes I found sdkconfig.defaults in the original repos. Look forward to seeing it work.

Thank you for your help. I am able to compile and run successfully.

I did something differently b/c this menu config looks new and complicated to me. So, I just copied the sdkconfig.defaults file. I see how “pio run -t menuconfig” work.

sdkconfig.defaults (for the example) is different. 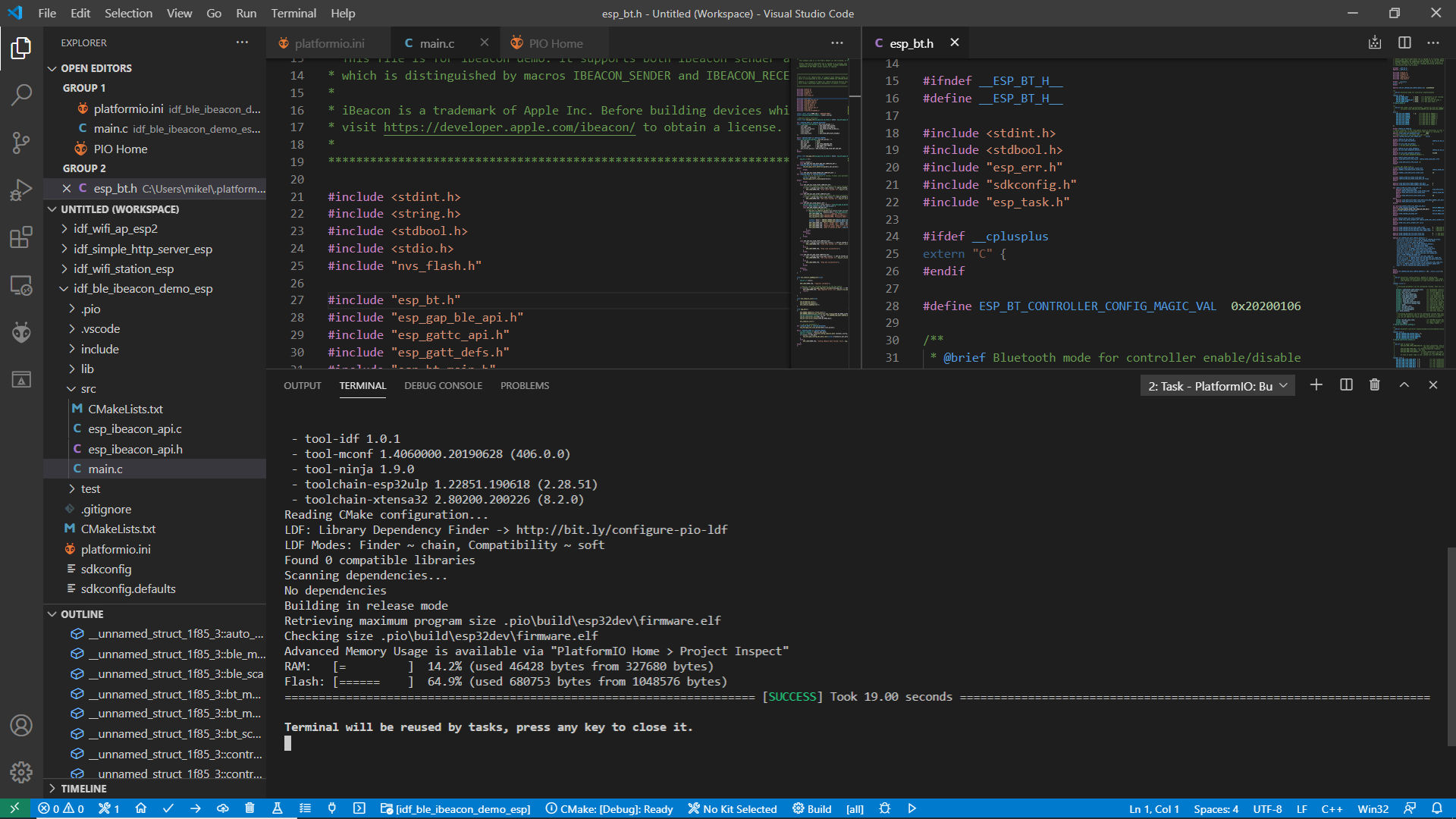 It seems that I don’t need to make the 3 changes to make the project ESP-IDF v4.0.1 compatible. Please correct me if I am wrong.

Now I want to enable both BLE and WiFi co-existence for my real project. Is this the only option I need to enable? Would you know if there is an example of BLE and WiFi combo example made by Expressif? I can’t find an example. Hope you can help me on this.

Now I want to enable both BLE and WiFi co-existence for my real project. Is this the only option I need to enable? Would you know if there is an example of BLE and WiFi combo example made by Expressif? I can’t find an example. Hope you can help me on this.

I will try both examples. Thank you so much for sharing them with me.

I have another question for you. My firmware uses some libraries in Arduino framework. Can I enable these Wifi/BLE coexistence configuration features for the Arduino framework within Platform IO? So, I can avoid writing a lot of codes for IDF framework.

Arduino-ESP32 uses a precompiled ESP-IDF base in the form of .a archive files, see https://github.com/espressif/arduino-esp32/tree/master/tools/sdk/lib. If you need a different ESP-IDF base with different objects you will have to recompile ESP-IDF and substitute the compiled libraries. https://github.com/espressif/arduino-esp32/issues/2125#issuecomment-443526478 is a pointer on how to do that (I’ve never done it myself).

So that also means that Arduino-ESP32 is based on ESP-IDF so you will have their code in there too.

Great. I am excited to try it. Thank you for your help!
Michael

I need your help. I have a problem with using sdkconfig.defaults.

This is what I have been using. This method works fine to compile ibeacon example. The project runs successfully.

I open sdkconfig and realize that it is not same as sdkconfig.default.

Now, I want to use sdkconfig.defaults. I copy it to my project directory and then build (pio -run).
It won’t compile because it cannot locate the esp_bt.h file.

According to this doc, it seems that I need to delete sdkconfig file and allow the tool to rebuild sdkconfig with sdkconfig.defaults. It did not happen.

Can you help me? I think that this is very important as the wifi/ble coex example has a very complex sdkconfig.defaults. I can’t just configure all the settings correctly with >pio run -t menuconfig. I need to use sdkconfig.defaults.