I am trying to run the debugger on the example poi code “blink”, and cannot find what I have done wrong. Can someone help please with this error?
Thanks!

Full platformio.ini? There are a dozen “Blink” examples for each supported microcontroller platform…

Yes. I installed the full blink example set for platformio.ini. All I want it for is the arduino mkr wifi1010. Can’t seem to get the debugging working no matter what I do. Thanks for your help!

So, what external debug probe have you connected to your board? Just like the documentation says, this board doesn’t have an on-board debugger, but supports an Atmel ICE, Black Magic Probe and JLink for debugging. Without one you can just upload to the board, but not step-by-step debug it with breakpoints etc.

That is my problem. Thanks. I will need to purchase a board. Any recommendations?

I’m dealing with a similar issue with an atmelsam board where I was/am getting the same error. Of course my situation is different and I’m using a Blackmagic Probe Clone (jeffprobe)and hope to use SWD not JTAG 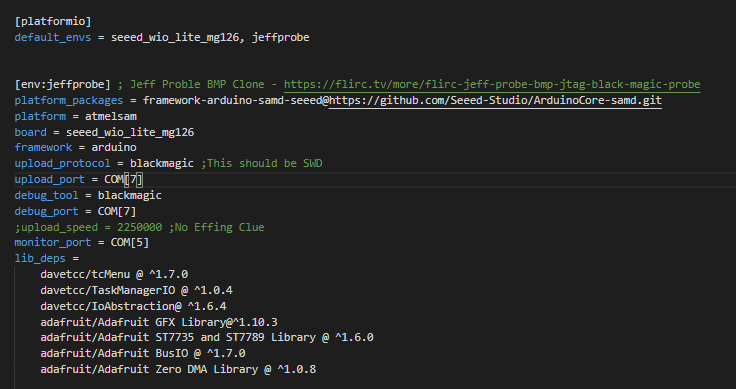 but I get this

which makes me nervous because I don’t necessarily want to upload… I’m positive i’ll break it.

I want to explore being to be able to debug/connnect to the target live and see where I’m going wrong in my code. 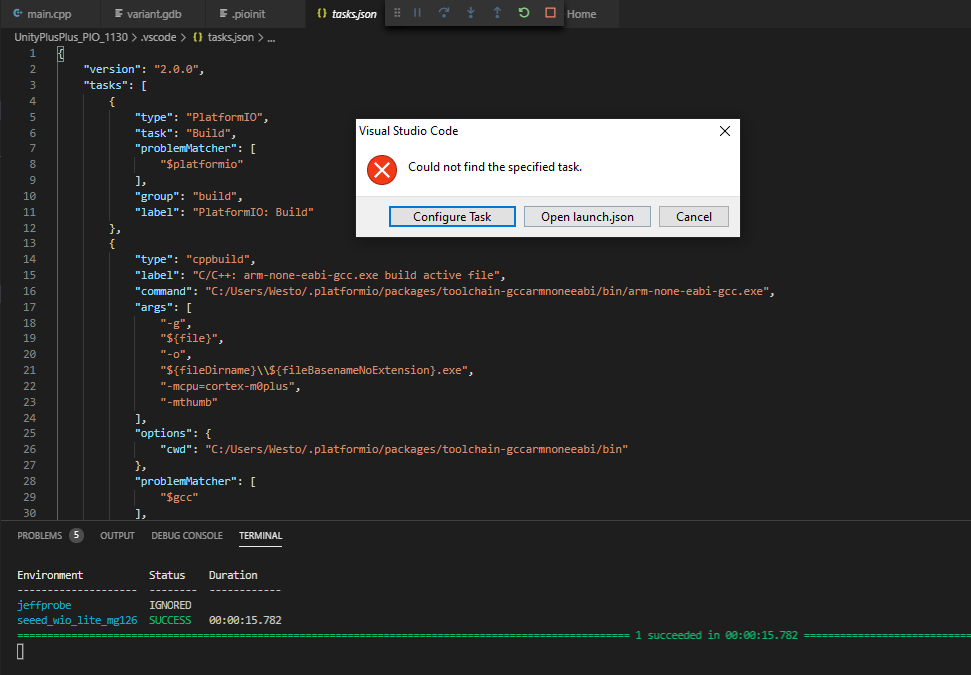 At one point I thought it had something to do with .pioinit but I can only find a cached file

I found this post (bellow) and learned that (at the time) jlink had not been incorporated into atmelsam. I believe I’m using the latest platform_packages framework and am wondering if maybe blackmagic probe had not been added either meaning that I’ll need to do a custom and I have no idea where to do that.
I feel like I’m right on the Devs heels when it comes to pushing the functionality of atmelsam. It’s been one thing after another. That’s not a judgement. It’s amazing that any of this works.

So my debugger has UART and SWD and I believe runs it’s on dbg server. How to connect to it and whatnot is a total mystery.

I have a very basic Arduino application (blink) that I am attempting to test using a Segger J-LINK Plus with a Arduino MKR1000. Ideally, I would like to use the JLink for both uploading and debugging. So far, not getting very far. I have tried several settings I have found in the documentation and community pages. Based on my last read I have removed any extra_script.py and only have settings in my platformio.ini as follows… [env:mkr1000USB] platform = atmelsam board = mkr1000USB framewo…