I just started to have error Failed to launch GDB: Error: write EPIPE on debugging start. 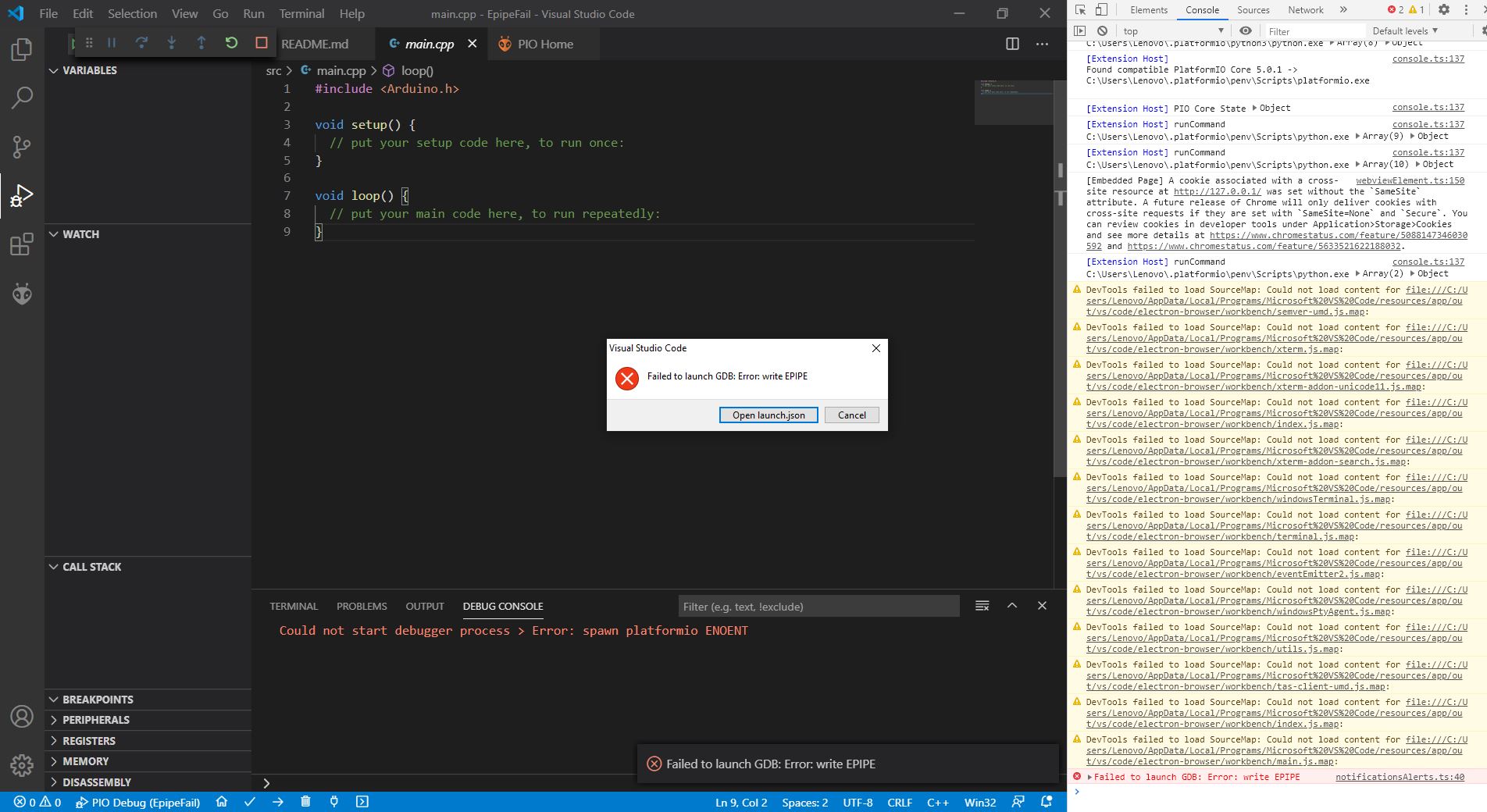 I am using PlatformIO IDE plugin for VS Code on Windows 10.
Yesterday and in the morning debugger was working. Then I turned off my laptop, turned it on back again hour later and now I cannot start debugging. Platformio is able to build code and upload on board (STSTM32F4 Discovery if it matters) but launching debugging session is blocked by that error.

Can someone help, and how can I assist in that?

Can you please check if downgrading the PIO extension makes a difference. On the left sidebar -> Extensions -> PlatformIO -> Cogwheel -> Install other version -> 2.1.0 (2.0.1 also working).

I cannot help but can confirm that I have exactly the same issue. I’m debugging a Wio Terminal (ATSAMD 51P19 MCU). Up to yesterday all worked perfect. Today have the same error messages,

Downgrading the PIO extension to version 2.1.0 fixed the issue for me. Version 2.1.1 did not work. I didn’t even see the PIO Home screen.

Yes that version is unstartable due to the bug described in https://github.com/platformio/platformio-vscode-ide/issues/2170, that’s why it was fixed and re-released within one hour, too, as 2.1.2.

Looking at the commit history yesterday I noticed commit

Do not propagate PlatformIO CLI to a default VSCode's terminal

…was removing that PlatformIO calls could be done in a normal terminal. This is a guess in the blue, but maybe it has something to do with the issue of not being able to start the debug server? Or maybe that commit interferes.

This patch is included since 2.1.1, so since extension version 2.1.0 works as reported, it’s a strong indication that that might have something to do with it.

Anyways, since 3 users have confirmed this issue (also see topic Error debugging for NUCLEO-F103RB, Can't debug with esp32), I think @ivankravets should look at this regression.

Sorry for the issue, fixed in https://github.com/platformio/platformio-vscode-ide/releases/tag/v2.1.3
Please update the extension.

P.S: @maxgerhardt, big THANK YOU that ping me always in these critical situations!

2.1.3 and debugging is working as it should.
Wow that was quick, thanks.