Build_flags = -include file option does never find file to be included

Hello there,
I was searching for a possibility to include the configuration header file by using the -include file option in my platformio ini file.

No matter what i write in my .ini file, the file is never found when I compile my project.

Is this option working for anybody? (I could not find any usage on the web so far to get a clue…)

Are you saying that the config file is in your src folder? If so, all you need is:

PlatformIO searches for *.cpp and *.h files in src, include, lib/* by default, so it should find your file regardless. Do not have a folder name in the #include, just the header file name.

any usage on the web so far to get a clue…

I met the same problems.

And I sove it by moving the .h file to the include_dir where default is include directory in root path in your project.

But I’m confusing with that, why I’ve add the path to the build_flags in platformio.ini but it seems still cannot find the .h file.

And I here is the structure of my project 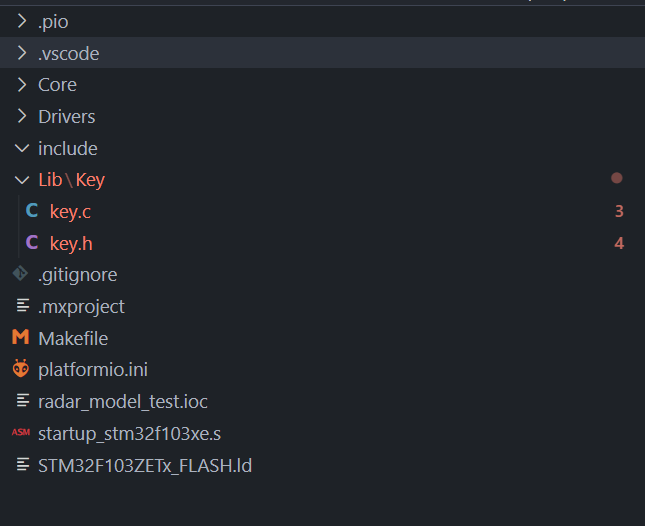 I got such errors when I not put the key.h file into the include dir.

but all the .h file needed are in my build_flags, and I could “solve it” by moving the key.h to the include dir.

I was so confusing why it happen, I will be very grateful to you for answering my questions.

Well, I’ll have a bash at a reply, but I might not be completely correct! (Given the layout of your project, I’m more of an Uno man myself!)

For the main project, header files can live in src or include. Both are searched automatically at compile time without any further action on your part, as are any directories added using build_flags -I ....

If you have header files that you want to have included in the project, or library compilations, which do not live in the project itself, then, add the directory/directories they live in to the build_flags in platformio.ini.

Lets say you have headers in SourceCode/headers then your build_flags will look like:

In your project, or libraries, to include SourceCode/headers/myHeader.h you simply #include "myHeader.h" and it will be found.

If you run a verbose compilation, you get these options passed for headers etc.

Here you can see that src and include in the project structure are scanned, and also the directory added using build_flags and the asm library source folder too.

Here you can see that src and include in the project structure are not scanned, only the directory added using build_flags and the asm library source folder too.

So which HAL driver headers does this include? The general one and the one for gpio?

I just search the macro-instruction and find it in the file stm32f1xx_hal_gpio.h
here is path for the hal driver .h file

But the fact I can unskillfully solve that by add the key.h to the include, and i use the debug skills(learned from your reply) by running platformio.exe run -v

I found that it doesn’t compile the key.c that maybe it solve the problem falsely?

Then I just add the correct stm32f1xx_hal_gpio.h file to the key.h and put it in the Lib dir. And the debug info as following

I can see it compile the key.c successfully!

thanks for your reply again! and maybe there still have problem when dowloading to the board, because the program seems not work

Following some solution I’ve add the board_build.ldscript = ./STM32F103ZETx_FLASH.ld to my platformio.ini. But it still doesn’t work.

but there seems another file startup_stm32f103xe.s in my root dir which seems importent and I doesn’t add it to my platformio.ini could you guys advice me on this?

Good morning. I’m afraid I am of little help to you regarding STM32, I have a couple of boards, but still in the boxes they came in. I’m more of a plain old Arduino, atmega328, kind of guy!