Projects stored on the network?

I’m very new to this PlatformIO in Arduino programming, but I love that IntelliSence like editor !

How ever I want to have my projects stored on my NAS-drive as default.

I think it’ll make a mess if I just move the PlatformIO folder from Documents to teh NAS - just like in VS C# - I have very bad experience doing that.

There have been multiple reports about problems with using network drives and the associated UNC paths because some portions of the build process rely on the cmd.exe, which does not support UNC paths and fails (PlatformIO now failing on mapped network drives - #4 by jackb).

If that has been solved now, idk.

As a test you should first use the “New Project” button in VSCode to create a project on your network drive and attempt to compile and upload it once. You can uncheck “Use default location” and point directly to the folder in which you want the project folder to be stored. 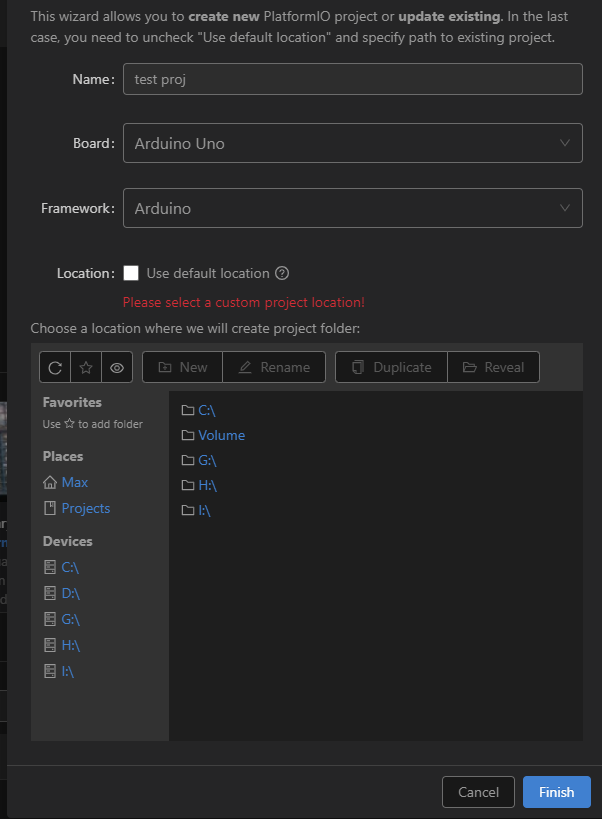 If successful, The default project directory can then be changed as seen in docs. When you open a PIO CLI and execute pio settings get you should see the current value of projects_dir. Then use the command pio settings set projects_dir <new path>, with the correct quoting if the path contains spaces, to set a new path, e.g.

THX for your quick and detailed respond - I’ll try in the next few days.

Oh, it’s way out of my skills to do these changes