Hello, I have difficulties starting a debug session for the feather M0 board using jLink EDU.
(I think that I didn’t have this problems 3 months ago)
After ‘Start Debugging’ the App is loaded on the board and stops at the normal breakpoint at init();
After hitting F5 the board stops in the routine ‘micros(void)’ (see picture 1). After (repeatedly) hitting F5 the CPU is restarted every time but gets a signal SIGTRAP and always stops
at the same line in the micros() routine (see picture 2). When I now click ‘Restart’ and immediatly after stopping at breakpoint init() hit F5 the program runs and I can debug.
I suspect that after the program is loaded to the board and started it cannot connect fast enough to the serial port.
Does anybody face the same issue and how can it be solved?
Kind regards
RoSchmi

PS: Second picture is missing as I’m not allowed to upload more then one. 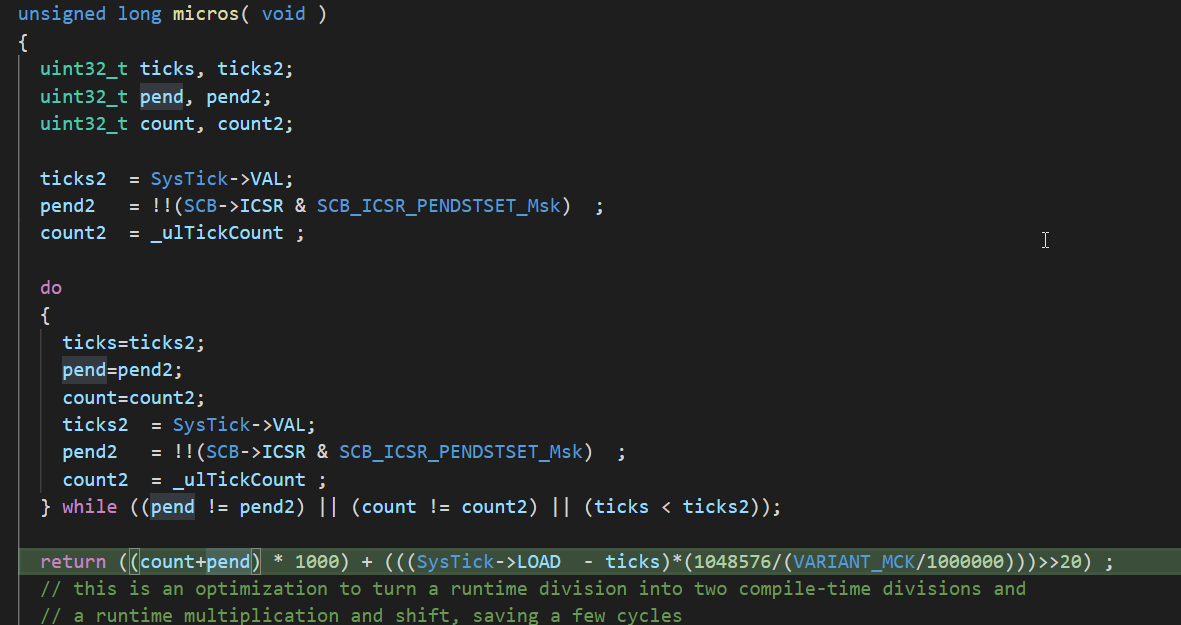 JLink ‘Stopping in Setup()'
Launch debug template don't work with SAMD21 board with jlink and Arduino framework
Arduino Nano 33 IOT Debug: Why do I always have to start my code twice?
RoSchmi March 2, 2020, 3:51pm #2

Here is the second image

Can you provide more information?

Thanks @manuelbl for your interest and answer.
My OS is Windows 10
My Board is a Adafruit Feather M0 RFM69 Packet Radio (433 MHz)
My platformio.ini file is:

Here is my sample code:

The first (intrinsic) stop at init() is in C:\Users\Roland.platformio\packages\framework-arduino-samd-adafruit\cores\arduino\main.cpp

Thanks for the information. That gives the full context.

I remember having run into this problem as well. The serial port is a virtual port (USB CDC) and implemented in software only. If the program is stopped at the wrong time, your computer thinks that the USB device (your Feather board) is not communicating and ignores it. And the boards waits for the computer to contact it, which never happens. At least that’s what it looks like.

If I remember correctly, you have to prevent the debugger from stopping too early. The best approach is probably to disable the temporary break point that is set on main. In platformio.ini, add:

Set a breakpoint wherever the debugger should stop instead. If I’m not mistaken, it needs to be after Serial.begin(...) to ensure the serial port is correctly set up and the computer is communicating with the device.

Thanks for your answer. Unfortunately it didn’t solve the problem.

The program makes a first stop in the Reset_Handler (see picture), after hitting F5 in the micros() routine as before.

The program makes a first stop in the micros() routine.

I can now live with the way to click ‘Restart’ (Ctrl+Shift+F5) after the first stop but that’s not the way it should be.

I just read your tutorial:

Some Arduino boards have debugging signals exposed . This guide shows how to use them with the PlatformIO debugger.

I saw that the boards you used have a Reset pin besides SWD and SWCLCK. My feather M0 board has only SWD and SWCLCK Can this be the reason why it is not working “out of the box”?

According to the PlatformIO documentation, debug_init_break = should disable the initial break point. I’ll have to do some tests why it isn’t working.

The reset pin won’t make a difference. Unless I can connect a fully configured cable, I don’t usually connect the reset pin as it isn’t really needed. The chip can also be reset by SWD and JTAG commands.

My understanding is that the SAMD21 and/or Adafruit Arduino board support is part of the problem. They could change the USB code such that it triggers a USB reenumeration during initialization. That would get rid of most of the problems when running the board with a debugger.

I was able to resolve this issue by upgrading the bootloader of my Feather M0 to v2.0.0. I suspect the cause of this issue the old bootloader immediately hard faulting on first reset with the debugger enabled, causing a breakpoint and confusing GDB, though I’d have to do more investigation to be sure.

If you are having this issue, you can upgrade your bootloader by grabbing the latest version from the adafruit SAMD core (https://github.com/adafruit/ArduinoCore-samd/blob/master/bootloaders/featherM0/bootloader-feather_m0-v2.0.0-adafruit.5.elf) and then using the following instructions to flash it: https://learn.adafruit.com/proper-step-debugging-atsamd21-arduino-zero-m0/restoring-bootloader. Note that in newer versions of Atmel studio the BOOTPROT fuse menu was changed to different options, and instead of “7” you will want to select “0 Bytes”.

Thank you @prototypicalpro for your help.
Unfortunately upgrading the bootloader to V2.0.0 didn’t solve the problem on my board.
The program stops at the normal initial breakpoint at init(); After hitting F5 my PC shows the Message box with ‘USB device not recognized’ at the lower right corner of the screen and debugging is not possible.
(This is different to the behavior with the other bootloader where had 'received signal SIGTRAP and the program stopped in the micros() routine). I If I click the ‘Restart’ button (CTRL+SHIFT+F5) after reaching the initial breakpoint at init() and then hit F5 after it stops again at this initial breakpoint I can bebug as expected.
If I add ‘debug_init_break =’ to my platformio.ini as suggested by @mauelbl the program stops at ‘void Reset_Handler(void){’ (see picture above) and my PC gives the same ‘USB device not recognized’ message.

I ran into that issue as well. After a lot of troubleshooting, the only way I was able to get USB Serial working during debug mode was to remove the bootloader from the Feather M0 entirely. I’m entirely lost as to why this would fix the issue, but I am happy to report that debugging seems to work normally now.

To flash your Feather M0 with no bootloader, you will need to use Atmel Studio to set the BOOTPROT fuse to 0 bytes (should be the same process as the instructions I posted earlier). Once the bootloader partition is unprotected, you can use the following custom board JSON to tell PlatformIO to compile for a no-bootloader Feather M0:

This JSON is the same as the standard Feather M0 board profile, except upload.offset_address and build.arduino.ldscript were changed to place your program where the bootloader would normally be. To use this file, save it as adafruit_feather_m0_no_bootloader.json under a boards directory in your PlatformIO project, then edit your platformio.ini to reference it:

Once I implemented the fix above, the only other modification I needed to make was to ensure that I didn’t interrupt Serial when it was establishing a connection to the serial monitor:

With those two modifications I was able to get debugging and the serial monitor to function normally.

Thanks @prototypicalpro for your work!
Your solution works!!
As the solution is not really self explanatory for a beginner it would be nice if the PlatformIo staff could find an easier solution in future PlatformIO versions.
Debugging with PlatformIO is really a great breakthrough in comparison to the Arduino IDE.
Thanks a lot

Run into the same problem with a Feather M0 LoRa. Your solution worked perfectly. Thanks for the in-depth explanations. You saved my day!

I had the same issue, though even without any serial running in my code. I was able to sometimes get debugging to work, though very erratically. It was only after removing the bootloader that I could reliably get debugging to work. I have the Feather M0 RFM69 900MHz board. I did not need to add the debug_init_break = option to turn off the initial breakpoint. Also, I found that adding the following debug build flags in the platformio.ini were helpful: debug_build_flags = -O0 -ggdb3 -g3. So my full platmormio.ini file for this project is:

Also, I found the Platformio documentation here to be helpful. Thanks, @prototypicalpro!

Thanks @prototypicalpro. I can now step thru the code. I am very glad you took the time to share your solution.