How do I find my devices to upload to?

Let me start by stating I am not very computer literate. Not even sure what I’m asking or if I’m saying things right.

Working with Marlin 2 firmware in both Visual Studio and Atom through Platformio. Platformio automatically detected my sdcard on the F: drive to upload to when I compiled for a LPC1768 board and everything went without to much of a hiccup. I’ve been trying to do the same with a STM32F4 board and have run into issues to far above my head to comprehend. After months of frustration i finally decided to put an atmega2560 based board back into my printer that was working with Marlin 1.1.9 but figured i would go ahead and upgrade it to Marlin 2.

After compiling and building without any issues I can’t get it to upload. Platformio isn’t autodetecting the upload port anymore and when i try and set upload_port = F:\ in platformio.ini it tells me access is denied when it tries to upload. I have no other apps running and no other window open except Google. Could there be something in the background connecting to it that I don’t see?. It list my sd card under logical devices on the Platformio tab so it sees it right? I actually have two sd cards, one in the built in reader(H:) and one in a USB hub(F:) and neither one works but it lists them both. I’m copying the path in the device list and just pasting it but am I putting in the wrong path name?

I know the issue is due to my lack of knowledge but if someone could just guide me to something I don’t need an engineering degree to understand, I would be very appreciative.

Is this still for the atmega2560 based board? As I don’t think specifying an upload_port to be a SD card is correct… for atmelavr boards you program them via the serial / com port - i.e. COM4, COM7 … whatever serial port it comes up as on your system.

For your LPC1768, it’s possible you missed this right at the end of the guide on the marlin site where it tells you that you should be copying it manually…

(although that path is wrong now… it’s .pio/build/board_name/firmware.bin now…

For platforms that use a firmware.bin file such as the LPC1768 and LPC1769

Aloha and thank you for the response!

The LPC1768 Board (its a SKR V1.3) was actually the one that went off without a hitch. Built and uploaded to my sd card in the F: drive automatically. Printer currently printing right next to me working great.

It’s the STM32F4 (SKR Pro V1.1) that was giving me the headaches, kept seeing Google searches with ppl having the same issue with that particular board, I’m thinking bug issue and will wait until one of you smarter ppl figures out what to do about it.

Platformio is working correctly and doing what it is supposed to be doing because the atmega board problem is due to my inexperience…gotta plug the board directly into the computer, can’t flash the firmware with a sd card like the LPC1768 apparently - i.e.COM4, COM7…lol Nothing like a bunch of zeros and ones to make me feel dumb.

Thanks again for the help.

Hey, at least you’re not giving up 'cause it’s all greek to you!

I’m not familiar with how they do things with the Marlin firmware, but the manual for your board suggests that you …

Customize the firmware and compile it. Check for errors. If there are no errors, find the
firmware.bin file. Copy it to the SD card and plug the SD card in the board. Reboot the
board, wait for about 10 seconds before doing anything else with the board.

… so it sounds like Bigtree Tech’s own advise is to compile it, look for the output .bin file and copy it to your SD card… i.e. compile the code, and then browse to the path shown at the end of the build …

… which is easiest done by right clicking on the .pio folder in the file explorer panel … but it’s basically in the project folder where you have the marlin firmware source. 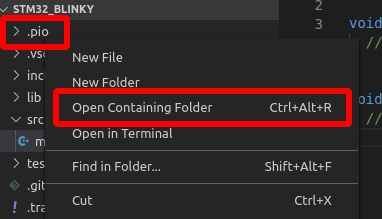 Thanks again for your time, I really appreciate getting guidance on my issues.

I was really excited after reading your reply but, of course, life happens and I haven’t had time to try anything until I got home today. I got the board back out, hooked up a display and just connected it to the computer to power it up. After building Marlin successfully, I found the .bin file right where you said it would be and copied it to my sd card. When I restarted the board, the LEDs began to flash like the board was doing it’s thing and the computer chimed like a new device had connected to it but the display remained blank. I tried everything again in various orders but couldn’t get anything to work. I even wired in a touch display to the board to verify it wasn’t the display but it kept saying there was no device to connect.to.

The weird thing, though, I had to run out and forgot to unplug the board. When I got back, the Marlin splash screen was on the display. It wouldn’t respond to anything and when i restarted the board the display remained blank like before and I can’t get it to do it again.

And this is being compiled for the correct board / processor type?

Is this the code you’re trying to compile? As it seems the ‘official’ Marlin 2 may not be working yet or support this board, but Bigtree Tech appear to be maintaining a port in their own repo. Also seems to be set to the correct build for the correct board/environment out of the box.

I was going to reply that I had tried the BIGTREETECH repo and had even tried a fresh download straight from Marlin, both without success but decided before that, what the hell, I’ve downloaded this thing so many times, I’ll start all over again for the 12th time. There was something different this time though. Someone updated the BIGTREETECH Marlin folder today. I’ve went through this configuration (so many times now that it didn’t take me long) making the basic changes and following the guidelines YOU pointed out and I now have a running printer. Thank you.

I don’t know if it was just missing the sd card copy thing or if something actually got updated today but either way, I’m a happy camper! Thanks for sticking through it and putting up with my stubborn old man rants. Sometimes it just takes another set of eyes because you’re right, most of it WAS Greek to me, lol.

Regardless of the culprit, glad you got it working… so have fun printing!

Kaleikai, did you managed to upload the Marlin firmware completely successfully for the BIGTREETECH SKR V1.1 Pro, with working TFT touch screen and SD card?

I’m searching for a proper affordable controller card and this looks like a viable option. I’ve tried others, but could not open source firmware installed.

I have successfully flashed the SKR Pro V1.1 with Marlin bugfix-2.0.x on my custom built RepRap and have the TFT display working alongside the LCD screen. Don’t particularly care for the TFT display (preferring the LCD) but it does have its uses. I have the SD card on the board functioning as well (I disabled the one on the controller) along with the ESP01 wifi interface but I’m running everything through Octoprint so don’t use it. Makes reflashing the board alot easier though. The Pro also has separate power inputs for the board, the motors and the heated bed so you could run the motors at 36v, the heated bed at 24v and the board itself with 12V if you wanted. Myself, I have everything at 24v but having the separate inputs makes it safer so you’re not pushing all the current through one set of wires.

Very happy with the SKR Pro but it was a headache getting it setup. Mostly due to my own ignorance. Took a lot of Google and the help from “pfeerick” to get it working. I actually flashed it with the Repetier firmware first but it didn’t have the options that Marlin did so I switched back. If you don’t need the 6th stepper driver and don’t care about the wifi, the SKR V1.3 was a lot easier to get setup. You have to use a SD card to flash the SKR Pro(STM32F4 mcu) but the SKR V1.3(LPC1768 mcu) was able to use a COM port. Both are 32 bit boards but the STM2F4 is supposedly much better than the LPC1768. I put the V1.3 in my Ender 3 and was a huge improvement over the stock Melzi board. It also seemed like there was more community support for it but there is probably more ppl using the SKR pro by now.

Either way I highly recommend the SKR line, I will probably upgarde my Delta with the SKR mini and swap out my Printer using a TANGO (RUMBA derivative) board with another SKR Pro. Just not enough hours in the day. I would also recommend using the TMC Stepper drivers because both the SKR Pro and the SKR V1.3 have the SPI and UART built in so no additional wires, just some jumpers to move around. The SKR Pro also has more pins available to add functionality to the printer (LEDs, Filament sensors, Heated chamber, Smoke detector, Laser, etc.). Though, I have not been able to get the Joystick implemented yet, might have been the pins I chose created a conflict but it’s now just another project on the list to eventually get to, lol.

Thank you for the well woorded reply. It sounds as if the SKR is a worth while investment. I will most likely look at the PRO, as having additional functionality can always come in handy. I might bend your ear for assistance, once I get mine.

I 'm having mixed successes with my SKR Pro. It works fine, in principal. I have dual Z steppers running with TMC 2130 controllers, using end stops, not sensorless homing. I’m impressed with them, they are as quite as a mouse. I have the 35 TFT ver 2.

Here are my problem(s),
I can print using repetier host, but at some point the serial interface “disengage”. It is almost exactly at the same point in a print. I installed the latest STM usb driver, experimented with settings and baudrates, with no success. Any advice?

I am not able to print using the onboard USB (micro usb).

I am not able to print using the TFF USB. It seems as if the TFT acts as a separate controller. I can access the gcode file and initiate the print, but it hangs there.

From your earlier post I’m thinking you have the 35TFT V3, that operates in TFT or LCD mode.